dw_guestfest: Currently open for prompts & sign-ups! A ficathon celebrating the minor and guest characters from every corner of the Whoniverse. We've already got some excellent Fourth Doctor era prompts waiting to be claimed! Please come and join us! 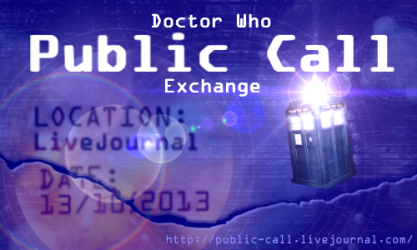 public_call is a new secret santa fic exchange for Doctor Who and its various related fandoms, run through LJ and AO3. All Whovian canons are welcome.

unwhosual is a prompt comm for Doctor Who
intending to cover ships, spin-offs and crossovers
typically glossed over, that the fandom at large has
moved on from, or which nobody has thought to do
before. Membership is open and posting unmoderated,
and you can prompt as many ideas as you like,
and you can fill as many prompts as you like.

Need a pick me up? Want to make someone's day?

The Cheering Up Meme!

First, "Rose", the debut episode of the regenerated Doctor Who series, was
broadcast on BBC. Producer Julie Gardner said that she was hoping against
hope that they'd be lucky enough to get 6 million viewers, but in the back
of her mind she expected it to be 3 million. She was completely shocked
when 11 million viewers tuned in to watch the moment when Rose Tyler's life
would change forever.

Second, something very similar happened a little closer to home. The very
first TimeGate occurred that same day! And just like with "Rose" ... we
were hoping to get 40 or 50 people, but Susan and I told each other. "If we
only get 25, we'll be thrilled. This is something we've wanted to do for a
long time and we're going to enjoy it no matter what." We were totally
blown away when *85 people* attended that very first one-day mini-con.

As you know, TimeGate has grown immensely since that day 6 years ago. Those
first few TimeGates were one-day affairs held in an Elk's Lodge. We had six
panels -- three Stargate ones and three Doctor Who ones. We showed videos,
we had gaming, we had special contests. We even had a few dealers at a
couple of them. But we had no guests at the first three TimeGates. And we
continued to grow. Pretty rapidly, in fact. Soon, we had to make the move
into a hotel and to a full weekend convention.

Since that time, our guests roster had really blossomed. We've had actors,
writers, script editors, and composers from both Doctor Who and Stargate.
We've also had authors, comic book illustrators, scientists, merchandisers,
film archivists, biographers, game designers and many more. And they've all
been wonderful!

And our audience has grown tremendously as well. We're expecting this year
to be our biggest attendance yet. A lot of that is due to the great guests
that we have booked, led by Sophie Aldred, Andrew Cartmel and Ben
Aaronovitch from Doctor Who (the Seventh Doctor era), and Mike Dopud from
Stargate Universe and the upcoming Battlestar Galactica: Blood and Chrome.

Thank you to everyone who has supported us from the beginning. And for
those of you that we picked up along the way -- thank you too for coming on
board and for continuing the journey with us. We are going to do everything
we can to make this year the best TimeGate ever.

Watching the Classic Who episodes where 'Romana' is introduced (“The Key to Time,” &c.), it occurs to me that the producers of Dr Who missed an amusing opportunity. That they would have passed it by even if it had occurred to them - that indeed they might not have been allowed, even if they'd wished it - is, for the purpose of my idle speculation, irrelevant…

( this opportunity for ratings bonanzaCollapse )

2 The screenwriter had perhaps read John Varley's Titan, where the main character, having been through all kinds of Lost World adventures of danger and exhaustion, was asked by the Big Boss at the end, “Was it fun?” and she opened her mouth in outrage - and closed it again. Yah, actually - it had been the adventure of a lifetime!

I just watched this again after having not seen it in a good 10 years. As much as I can loathe JNT at times, I do really enjoy this episode. There's just so many little moments of genuis that have stuck with me over the years since I first saw this episode back in the 80's: the Doctor's scarf being tied around the neck of the stragulation victim,the beads falling off of Argoilians heads etc.

I also really enjoy Peter Howell's theme and incidental music. It instantly takes me back to being 11 and watching Who on Saturday afternoons. And for that reason, most of Davidson's stories have stuck with me just as long.

I like Davidson as well, but mainly his stories. I think his character lacked the presence and insight of almost every previous Doctor. He allways seemed to me to be a fumbling, awkward, asthmatic sort of graduate student who was unsure of himself.

The fouled regeration may have been an attempt by JNT to reset the character a bit, but in my opinion he should have developed the personality differently, but yet kept the character of a centuries old timelord. Companions are for the audience to identify with, not the Doctor, at least IMHO.

Fandom: Doctor Who
Title: Turn Your Back
Rating: All Audiences
Genre: Humor
Warnings: Nudity
Synopsis: The Eleventh Doctor said, "If it embarrasses you, turn your back," and I thought Hmmmm, nudity. What would the first 10 Doctors do in a similar situation? Fun premise! So... Avert your eyes. Enjoy!

Doctor Five - Adric ran for it.

Doctor Six - He admired that in a woman.

One thing, though, both my betas were distracted by real life (the nerve!) and they had to withdraw. If anyone out there wants to send any sort of critique my way I'd be very grateful.

In the TimeGate yahoo group, an album has been created and filled with 225 pictures from TimeGate 2010! Take a look and enjoy. This year we had an especially large number of costumes throughout the convention and they were all great!

The TimeGate Facebook group also has many pictures from the 2010 convention - if Facebook is an easier location for you to get to. The link to that is http://www.facebook.com/?ref=home#!/group.php?gid=6095289289.

Thanks to those who have posted pictures.  I looked back through the posts and did not see a link to this article about TimeGate on CNN, so I thought I would share!  Happy reading!